Signs and Symptoms of Acute Bronchitis 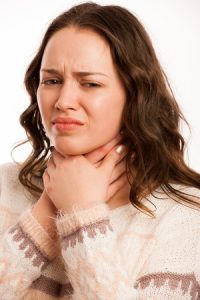 Acute bronchitis is a form of lower respiratory tract inflammation affecting the bronchi of the lungs. It’s usually not a serious illness and often comes on suddenly from other illnesses such as the cold or flu and is typically fought off by the immune system. However, people with weakened immune systems tend to develop more problems from the illness including seniors, young children, people with other health conditions including cancer or diabetes, and those who have not been immunized for the flu, pneumonia or whooping cough.

What is Acute Bronchitis?

Acute bronchitis, often referred to as a chest cold, is an illness that spreads from the nose and throat, causing swelling and irritation in the windpipe and airways.

As mentioned above, chest colds often show up in someone with an upper respiratory tract infection resulting from a cold or flu but can be caused by other germs such as bacteria, yeast or fungus. They also can be caused by polluted air (air that has chemical fumes, dust or cigarette smoke); avoiding these lung irritants is important for preventing acute bronchitis as well as treating it. In addition, those who have preceding medical problems may also be more likely to get bronchitis (for example: asthma, frequent swollen tonsils, allergies or heart problems).

This inflammation in the bronchioles usually affects children under the age of 2 with a peak age of 3 to 6 months. Babies who are premature may be at a higher risk for bronchitis.

At first, symptoms may look a lot like the symptoms of the common cold starting with a runny nose and slight fever for a few days. The most common sign of acute bronchitis includes a constant cough which may be dry or include green, yellow, white or bloody mucus as well as chest pain that accompanies the cough or that is felt with a deep breath. Other symptoms include:

How Long Does Acute Bronchitis Last?

Acute bronchitis typically lasts 2 to 3 weeks but the cough may linger for up to a couple of months (smokers take much longer to recover). Chronic bronchitis keeps coming back cumulatively lasting up to three months of the year for two years in a row.

One of the top burning questions searched for in Google last year: “Is bronchitis contagious?” The infection, which involves the upper respiratory tract is usually viral and considered contagious. However, the complication of the infection, bronchitis, is not contagious.

Patients can alleviate some of the symptoms by getting plenty of rest, drinking clear fluids and inhaling moist air (via a humidifier, steam shower, etc.). If you have overwhelming chest pain, wheezing and breathing difficulty, blood or yellow/green sputum in your mucus, or any of these along with a fever over 101°F, you should be evaluated by a physician. If you are wheezing, you may receive an inhaled medication (Albuterol or Xopenex) which can help open inflamed bronchial tubes. Note: antibiotics are not useful in the treatment of bronchitis. eMedical Urgent Care has convenient hours designed to fit your busy schedule. Learn more about our services and how we can treat you and your family by calling our location in Berkeley Heights, New Jersey (908) 464-6700, or Middletown, New Jersey (732) 957-0707.