6 Facts About Poison Ivy That You Didn’t Know 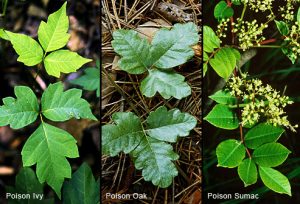 It’s summertime, which means we’re spending more time outdoors. But with the return of fun in the sun and the warm weather, we also must face the summer spoilers – mosquitoes, sun burn and those itchy, rash-inducing plants: Poison Ivy, Poison Oak and Poison Sumac.

Poison ivy and poison oak can grow in numerous locations in the continental United States, including open areas, wooded areas and even in your own back yard depending on where you live. Hawaii and Alaska are the only states that do not have this irritating plant. It’s also becoming more prevalent and toxic over the past several years possibly due to climate changes. Researchers are trying to link higher levels of carbon dioxide and warmer temperatures as a cause. Most Americans have either suffered from the itchy rash following exposure to poison ivy, poison oak and poison sumac — or they know someone who has. In fact, approximately 75 percent of the population will have an allergic reaction when exposed to the oil, known as urushiol, found in the roots, stems, berries and leaves of the plant. Once the urushiol touches your skin, it quickly penetrates and binds, causing a rash known as toxicodendron dermatitis. It usually begins as itchiness and redness, which then develops into a red, blistering rash. It can surface as early as one hour after exposure or take as long as 48 hours. Milder cases of the dermatitis can last five to 12 days, while a more severe case may take several weeks to resolve. An allergic reaction can occur by direct contact with the plant or when you touch objects that are contaminated with the oil, like your clothes, gardening gloves, shoes or tools. Therefore, it’s important to wash contaminated clothes separately and to wash your tools after use.

Treatment of toxicodendron dermatitis varies due to the severity of the allergic rash. Wash the affected areas as quickly as possible after exposure with isopropyl alcohol, if available, or cool water and a soap that breaks down oil, like a dish detergent. Don’t use hot water because it will allow the oil to penetrate through open skin pores. The oil can be removed in the first 10 to 20 minutes after contact but after an hour it has penetrated into your skin. Products like Tecnu and Zanfel also can prevent an allergic reaction. If you have a mild case, after washing as described above, if you have a rash, apply a topical steroid cream after showering. Be careful using it on your face, however. You can calm the itch by taking Benadryl or other antihistamines like Zyrtec, Allegra or Claritin. Calamine lotion or oatmeal baths also may offer some relief. NSAIDs, such as Motrin, Advil or Aleve, can help relieve the inflammation of the rash.

Signs You Should Seek Medical Attention

For moderate to serious dermatitis, you should consult with your doctor or seek help from eMedical Urgent Care. When the itching becomes intolerable, it’s time to see a doctor, who may prescribe a two- to three-week course of oral steroids. Other signs you should seek medical attention include:

How to Prevent Exposure

The best means of prevention is to learn how to identify the toxic plants and avoid them. Rhymes such as “Leaves of three, let them be” can help you identify poison ivy and oak, which can grow as a creeping vine with “hair-like” roots or as a shrub. Poison sumac grows in areas of standing water as a large shrub or small tree with leaf clusters of 7 to 13 leaves with black spots. When working or hiking in areas that have these poisonous plants, decrease your exposure risk by wearing gloves, long pants, long sleeves and closed shoes. Use care when removing your clothing so you don’t rub the oil from your clothes onto your skin, and wash contaminated clothes separately. A moment taken for prevention can prevent weeks of irritation.

Jane Sennett, DO, is the medical director for eMedical Urgent Care, formerly known as eMedical Offices (EMO). She joined eMedical Urgent Care in 2014. She is board-certified in emergency medicine. Dr. Sennett earned her medical degree from the University of Medicine and Dentistry of New Jersey’s School of Osteopathic Medicine and completed her emergency medicine residency at Union Hospital and Newark Beth Israel Medical Center. Dr. Sennett holds a bachelor’s degree in English from Rutgers University. She also is an attending physician at Overlook Medical Center- Union Campus and Robert Wood University Hospital at Rahway.